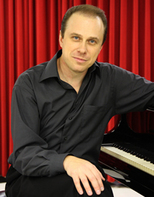 Igor Resnianski received his formal music degrees in Russia graduating with distinctions from Novosibirsk Music College under Professor Elena Storojuk, and Novosibirsk State Conservatory under Professor Mary Lebenzon. He continued his studies in the United States completing the Artist Diploma program under Dr. Tamás Ungár at Texas Christian University. In addition, he studied as a full scholarship student at the Van Cliburn International Summer Piano Institute, where he was under the tutelage of distinguished musicians Paul Badura-Skoda, John Lill, Fanny Waterman, and György Sebök. Mr. Resnianski holds a Doctoral degree from Temple University in Philadelphia where he studied with Professor Harvey Wedeen.  A Steinway artist, Mr. Resnianski is a prizewinner of many national and international piano competitions. He was awarded the First Prize in the New Orleans International Piano Competition, Luisiana; the Bronze Medal in the International World Piano Competition, Cincinnati, Ohio; the Bronze Medal in the Nena Wideman International Piano Competition.  In June 1996, Mr. Resnianski made his concerto debut in America performing with the Fort Worth Symphony Orchestra under conductor Keri-Lynn Wilson and in South America performing a solo recital at the International Music Festival in Medellin, Colombia. Since then he performed with the Kennett Symphony, New Orleans, Acadiana Symphony Orchestras, etc; gave solo recitals and chamber performances in the Steinway Hall, New York; Guizhou University, Guiyang China; Fort Worth and Arlington, TX; New Orleans and Lafayette, LA; Cincinnati, OH and Palm Beach, FL; Philadelphia, PA and Camden, NJ; Santa Clara, CA and Houston, TX; etc. His performances were televised and broadcasted in Novosibirsk, Russia; New Orleans, LA; Palm Beach, FL; Cincinnati, OH; etc. Mr. Resnianski performance was featured on the PBS/WHYY Y-Arts television channel.  Named by Pennsylvania Music Teaches Association "2012 Music Teacher of the Year" for the State of Pennsylvania, Dr. Resnianski is highly sought-after teacher who regularly gives master classes throughout the US and abroad. For many years, he served as a faculty and guest artist at the TCU/ Cliburn Piano Institute Fort Worth, Texas. Since 2006 he is on the faculty of Piano Texas International Academy and Festival in Fort Worth. For several years he gave lectures at Rutgers University in Camden, NJ during the Mozart summer course. He is a regular faculty of the New Orleans Piano Institute and the University of Houston Piano Institute.
Distinguished Guest Faculty: Gwendolyn Mok: Currently the Coordinator of Keyboard Studies at San Jose State University School of Music and Dance, Gwendolyn began her career at the Juilliard School of Music. She attended Yale University, where she completed her undergraduate studies, and State University of New York at Stony Brook, where she gained her Doctorate.  Born in New York, Ms. Mok has appeared in many of the world's leading concert halls including The Barbican,Carnegie Hall, The Kennedy Center, Avery Fisher Hall, Alice Tully Hall, and The Hong Kong Performing Arts Center. She is also frequently invited to play and record with major international orchestras most notably The London Symphony, The Philharmonia, The Hong Kong Philharmonic Orchestra, The Beijing Philharmonic Orchestra and The Residentie Orkestre of The Hague.  In his 90th year, Vlado Perlemuter chose Mok to be the last student to whom he would pass on his knowledge of Ravel. In 1994, the French Ministry of Culture awarded Ms. Mok a grant to study with Perlemuter for one year.  Since 1995, Mok has been performing Ravel's works in recital and was invited to teach these works at the Royal College of Music, Welsh College of Music, The Dartington International Summer School in Devon, and The San Francisco Conservatory of Music.  In 1996, Ms Mok made her official London debut in two concerts of Ravel in Somerset House, on a restored Erard grand piano of 1875, in the Great Room of the Courtauld Galleries. Mok's production, Ravel and the Post Impressionsists, was sponsored by Citibank UK. She was also featured in broadcasts of Ravel on BBC Radio 3, Music Matters, Woman's Hour and the World Service.  Ms Mok is a recording artist for Nonesuch/Elektra, Musical Heritage Society, Cala Records, and EMI. ​
CONDUCTORS: 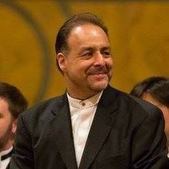 Joseph Ordaz (Artistic Director and Conductor) is currently the Music Director and Conductor of the Mission College Symphony in Santa Clara, California.  He is also the Artistic Director and Conductor of the California Concerto Weekend for Amateur Pianists.  Other orchestras that he has recently led in performance include the Berlin Sinfonietta, Winchester Orchestra, New Bridge Chamber Orchestra, Ohlone Symphony Orchestra and San Francisco State University Symphony.  Mr Ordaz has worked with such artists as Gwendolyn Mok, Jon Nakamatsu, Vân-Ánh (Vanessa) Võ, Jassen Tadorav, and others.  He has studied with many of the top conductors including Gustav Meier, Jorma Panula, John Farrerr, Diane Wittry,  Adrian Gnam, Marin Alsop, Joann Falletta, Jorge Mester, Kirk Trevor, Harold Farbermann, Mitchell Sardou Klein and William LaRue Jones. He has also studied in programs including the London Conductor's Workshop at the Royal Academy of Music, International Conductor's Workshop's in Berlin, Germany; Conductor's Guild Workshop's with the Buffalo Philharmonic and at the Cabrillo Festival of Contemporary Music; California Conducting Institute with the Bakersfield Symphony, "Beyond the Baton" workshop with the Norwalk Symphony and others.  He received his Bachelor of Music Degree from San Jose State University and his Master of Music Degree from the San Francisco Conservatory of Music.  He has performed as piano soloist with the Ft. Worth Chamber Orchestra, San Francisco Concerto Orchestra, Nova Vista Symphony, Mission Chamber Orchestra, Mission College Symphony, South Valley Symphony, San Jose State University Symphony, and New England Symphonic Ensemble, and at the TCU/Cliburn Piano Institute and University of Maryland International Piano Festival.  From 1991 - 2001, Mr. Ordaz also performed as a member of the Monterey Symphony and has performed in numerous recitals throughout the Bay Area including solo and chamber music.  He has also served on the Board of Directors of Steinway Society - The Bay Area and presented pre-concert lectures for their concert series.  Mr. Ordaz has previously taught at Gavilan and Foothill Colleges and for over ten years served as Chair of the Music Department at Mission College in Santa Clara, CA where he has been on the faculty since 1997. 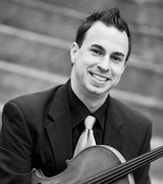 Michael Giel (Assistant Conductor) received his Bachelor of Music Performance in Viola and Bachelor of Music Education from Valdosta State University where he was a student of Karin Addis and Matson Topper. In 2008 he completed a Masters of Music Education from the University of Georgia. For the past seven years, Michael has served as the Orchestra Director for the Georgia Governors Honors Program at Valdosta State University.   He is also the conductor for the Capitol City Opera Company based in Atlanta, GA, directing productions including "Il trittico," "Cosi fan tutte," "La boheme," and "Sweeney Todd."  As a violist and violinist, Michael has performed with several orchestras in Georgia and Florida including the Gwinnett Philharmonic, Valdosta Symphony Orchestra, Ocmulgee Symphony, Gainesville (GA) Symphony, Albany (GA) Symphony, Coastal Symphony of Georgia, Rome (GA) Symphony, Atlanta Pops Orchestra, Ludwig Symphony Orchestra, Da Salo Solisti Chamber Orchestra, LaGrange Symphony, and the Central Florida Symphony.
STAFF: 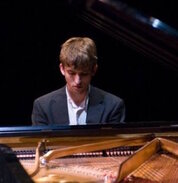 Sergiy Komirenko (Accompanist ) was born in Kyiv, Ukraine, and began studying piano at the age of five. Sergiy attended the Kyiv Lysenko Special Music School, where he was a student of Yuri Kot. After moving to the U.S. in 1998, Sergiy has studied with John Ruggero, Namiq Sultanov, James Giles, Nelita True, Elizabeth Buccheri (collaborative piano), Marcia Bosits (piano pedagogy), and Robert Gjerdingen (counterpoint). Sergiy holds a B.M. and a D.M.A. from Northwestern University, as well as an M.M. from the Eastman School of Music. Mr. Komirenko is currently an active teacher and accompanist in the Bay Area.
Dr. Joan Karr (CCW Co-Founder ) - received her B.A., M.A., and Ph.d. degrees in Education from The University of Michigan. She has taught ESL, served as Director of Continuing and Cooperative Education at Mercy College of Detroit; created events for the NFLAlumni and directed sports promotions for the Grand Prix of Miami; and was coordinator of the Palm Beach Piano Competition.   She also was chairman of Special Events Committee of WXEL, South Florida's Public Broadcasting Station and chairman of the Arts Council of Northwood University, Florida.  Joan is an amateur pianist and student of Igor Resnianski who guided her to performing as a soloist with the Fort Worth Symphony. She was a contributor to the University of Michigan School of Music graduation address titled "What music has meant in my life".  She lives in Bloomfield Hills, Michigan with her husband Ernie.﻿
Analiza Bibat-Dasalla (Sr. Administrative Assistant) Mission College Community Education

All artists, guests, events and schedule times subject to change.